With less than 24 hours left in October, I figured now is a good time to venture back to my Icelandic adventures from last year and write about what it’s like to travel around Iceland in October.

My friend Megan and I spent 7 days and 6 nights traveling around Southern Iceland in a camper van that we affectionately named “The Sheepsmobile.” After we got the keys to our van, our first stop was to a grocery store so we could stock up on food for the week. Our camper van came equipped with a portable stove, a pot, and utensils, so our plan was to make all of our meals ourselves. So for 7 days we basically survived on pb&j sandwiches, hard boiled eggs, and instant soup. After 7 days in a row of pb&j though, we never got sick of it!

Though it was cold, I’m really glad we decided to plan our trip to Iceland in October instead of over the summer. It wasn’t as crowded, AND we got to see the northern lights…twice! We really lucked out with the weather too. We had two rainy mornings that really dampened (better yet, soaked) our plans, but other than that, we had great weather to explore some of Iceland’s untouched, natural beauty. And spending a week in a camper van was so freeing! If you’re planning a trip to Iceland and can forgo your basic amenities (aka a shower), I really recommend renting a van. There are lots of rest stops all over Iceland, so we were able to use the bathrooms there and get a cup of hot coffee (or hot chocolate) in the mornings. AND, you will save so much money on food and lodging!

I did my best to remember the names of every place we visited last year. But where I lacked in name, I made up for in anecdotes. Enjoy! 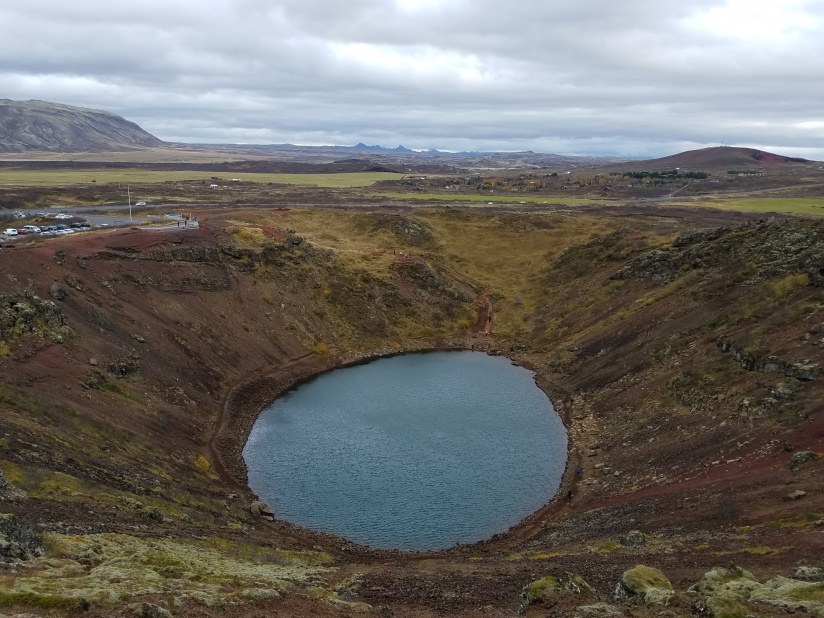 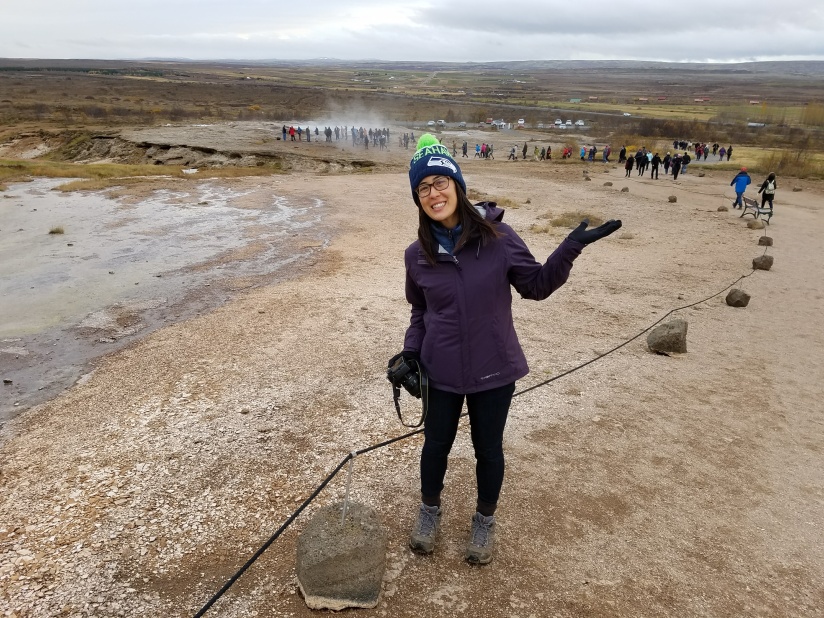 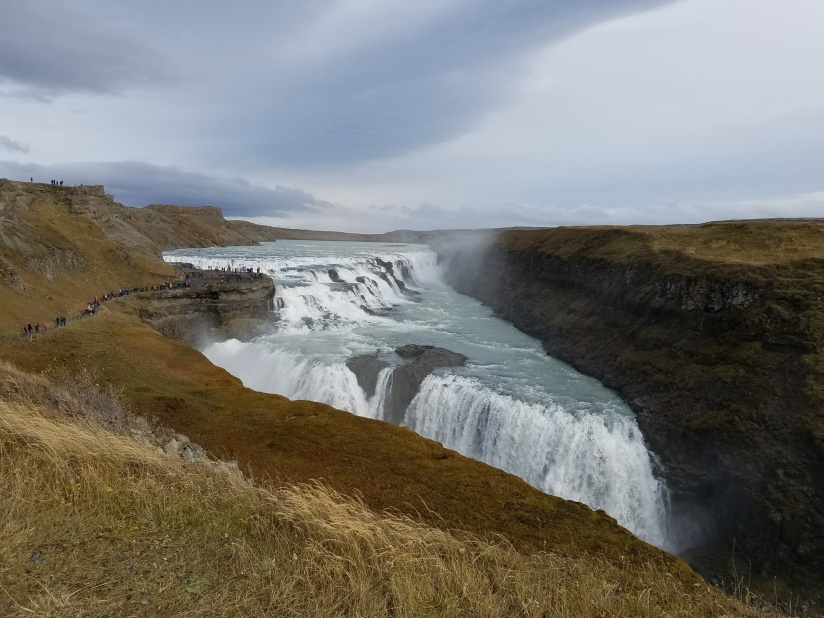 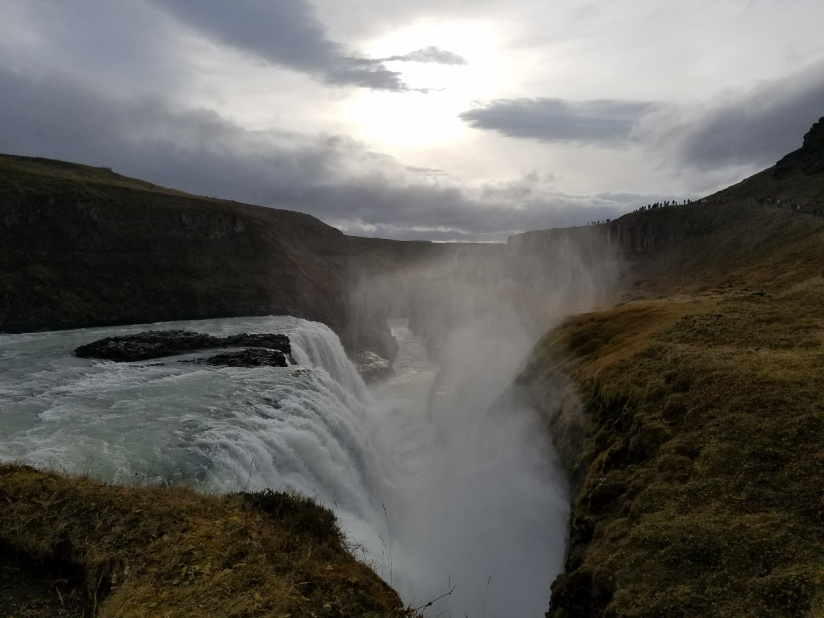 The first of many waterfall selfies 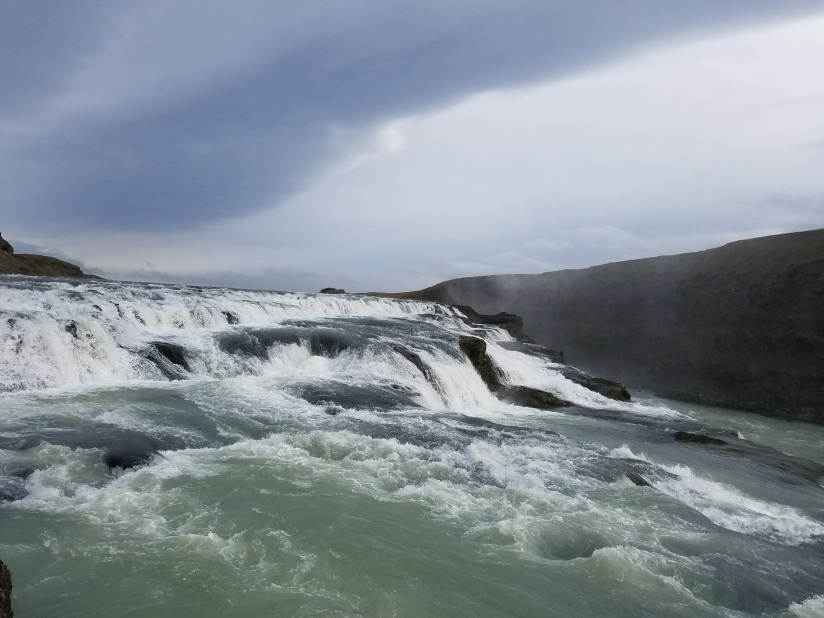 And the first of many grazing sheep pictures

We spent our first night in the camper van at the campsite next to Skogafoss Waterfall. Pro #1 of Iceland in October: Late October is not a popular time to travel around Iceland, so we didn’t have to book our campsite in advance or worry about there being no more space.

Is this Megan and Becca, or 2 aliens? 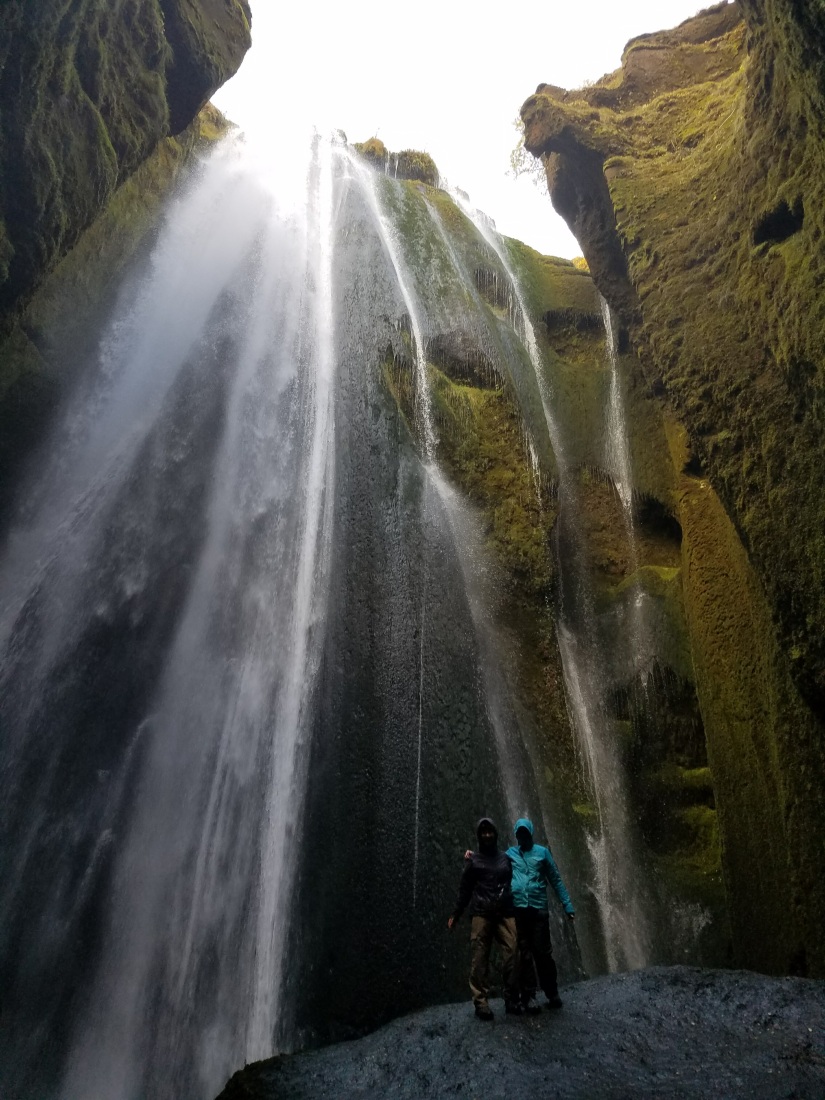 Walking behind Skogafoss is a must! 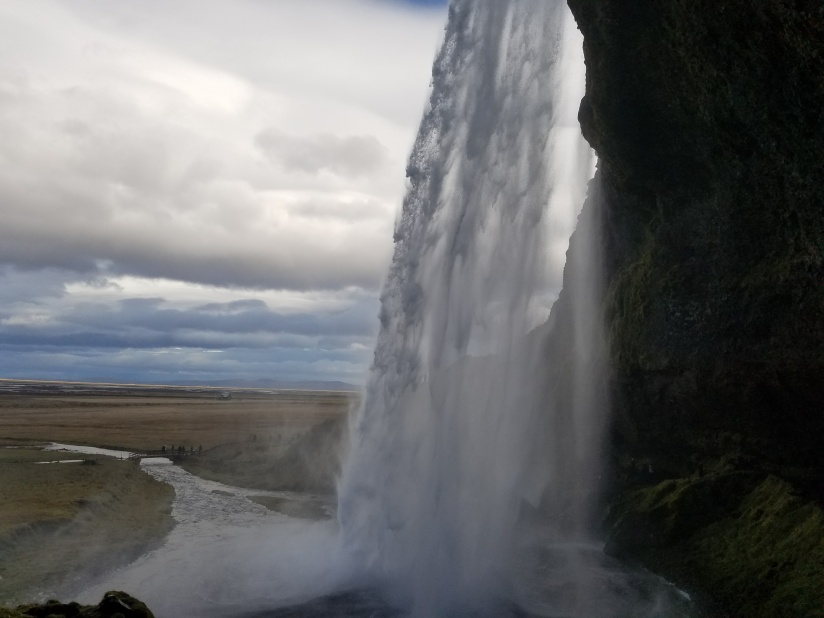 Ready for our first full day driving around in the Sheepsmobile! 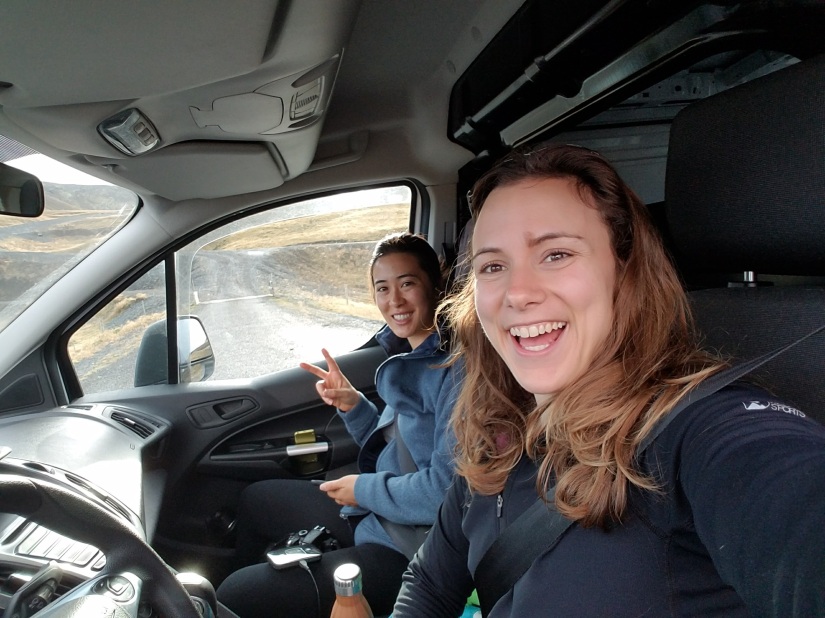 Glaciers in the background

I do not remember the name of this glacier, but I do remember the cold and the wind! And the warm hot chocolate at the visitor’s center afterwards. 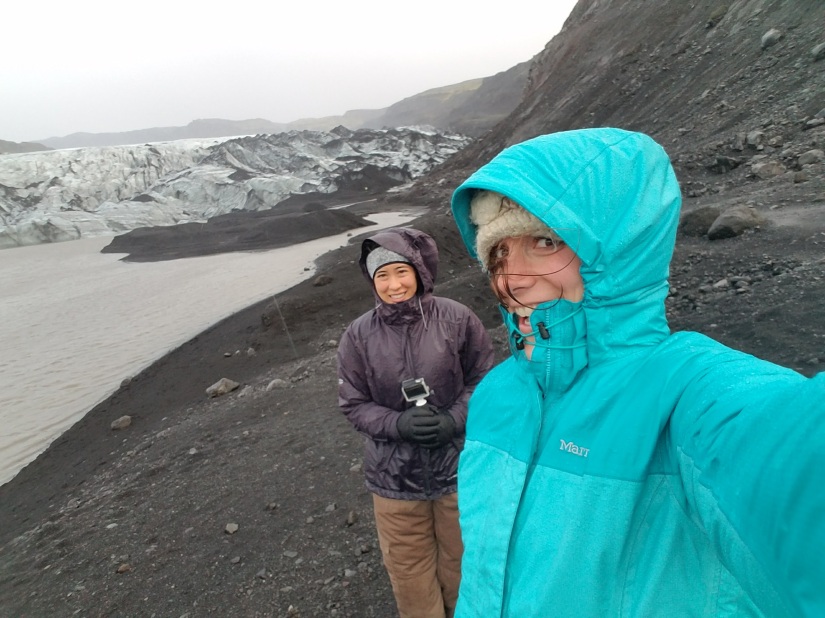 Our first day was very windy, rainy, and cold, but the weather cleared up by the end of the day. We stumbled on this cool place, which I can’t recall the name of either…and we drove here by accident again on the second to last day of our trip too! But visiting beautiful destinations in Iceland is like watching a really good movie…you’re going to want to see it twice to pick up on what you missed the first time around. 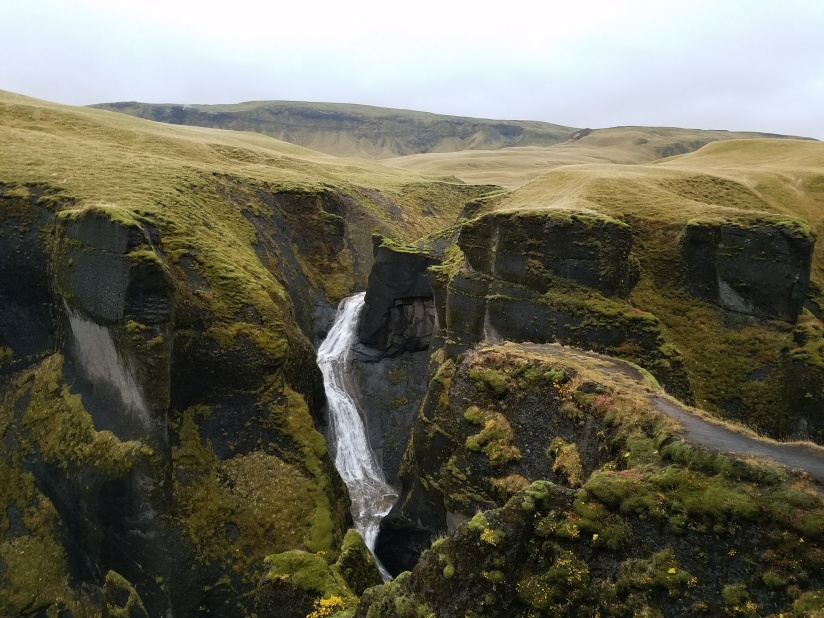 On our second day, we pulled off to the side of the road and into a field because we saw another camper van there and assumed it would be a good spot to take pictures. Turns out the two girls in the camper van got their clutch stuck in reverse and were waiting for a tow truck…but the spot still proved to be an epic place for pictures! 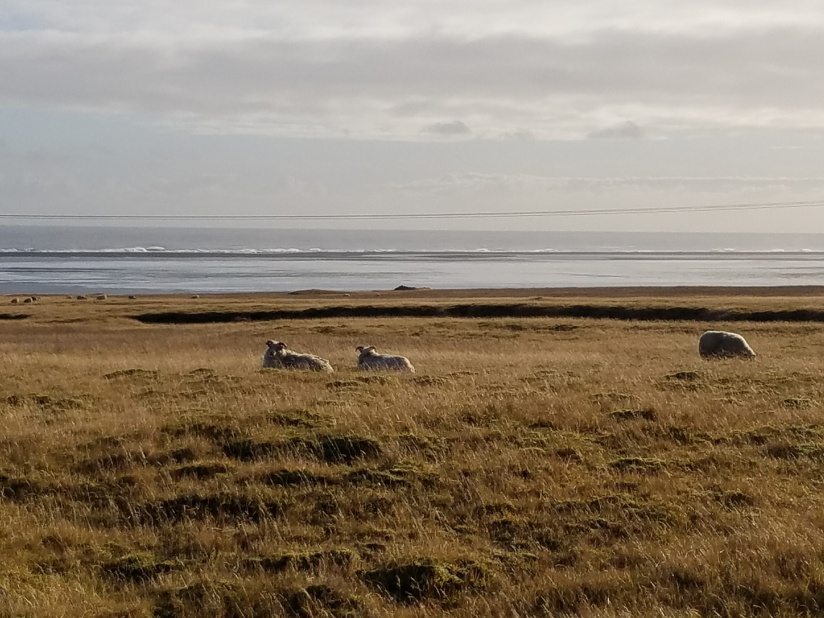 Cheesin’ at Jökulsárlón Glacier Lagoon. It’s definitely worth it to see this place in person! 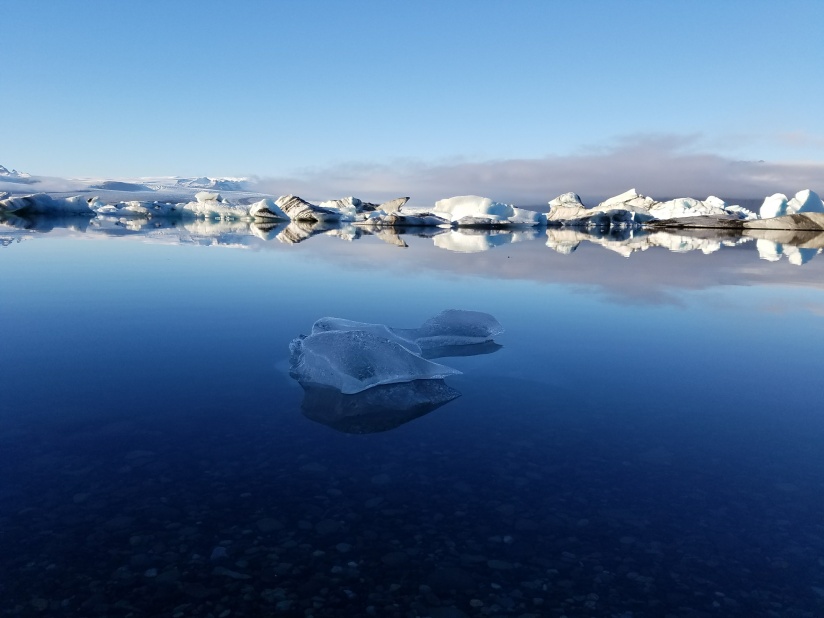 This might not have been a typical Amami sunset, but it was beautiful nonetheless!

We camped at Glacier Lagoon and got to see the northern lights! Pro #2 of Iceland in October: You have a greater chance of seeing the Aurora Borealis. 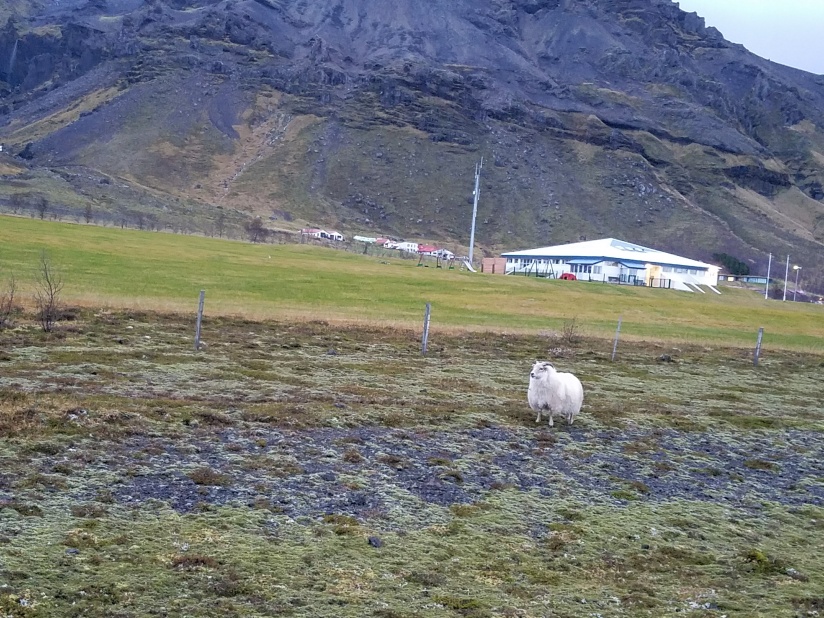 I also don’t remember the name of this glacier. But I do remember this was the first stop we visited after our ice climbing tour was canceled. Instead of booking a later tour, we decided to get our money back and spend the day driving around and finding new places to explore.

Systrafoss Waterfall (Allegedly, two nuns had drowned in a lake near by a long time ago. I can’t resist a spooky anecdote.)

Reynisfjara, The Black Sand Beach near the village of Vík í Mýrdal. It was really busy here so it was hard to get good pictures, but the most interesting thing was sharing the sand with dozens of high school students from the U.K. who were on a school trip–seriously, can you imagine going on a field trip to Iceland?!

Megan is a great friend because she knows how much I love lighthouse and didn’t mind taking a long walk uphill to visit the Dyrhólaey lighthouse with me. 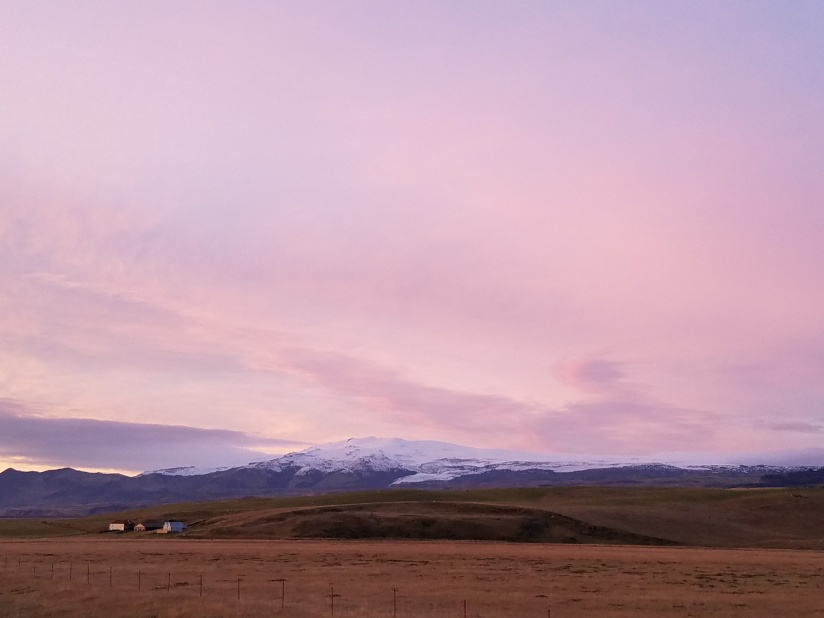 We were too late to see any puffins when we went to Iceland, but at least I got to pose with this guy. And because of stopping to take this picture, we happened upon our very favorite waterfall of the trip: Gluggafoss! And yes, our reason for choosing Gluggafoss for our next destination was because the name sounded cool. (That’s how I choose bottles of wine, too.) 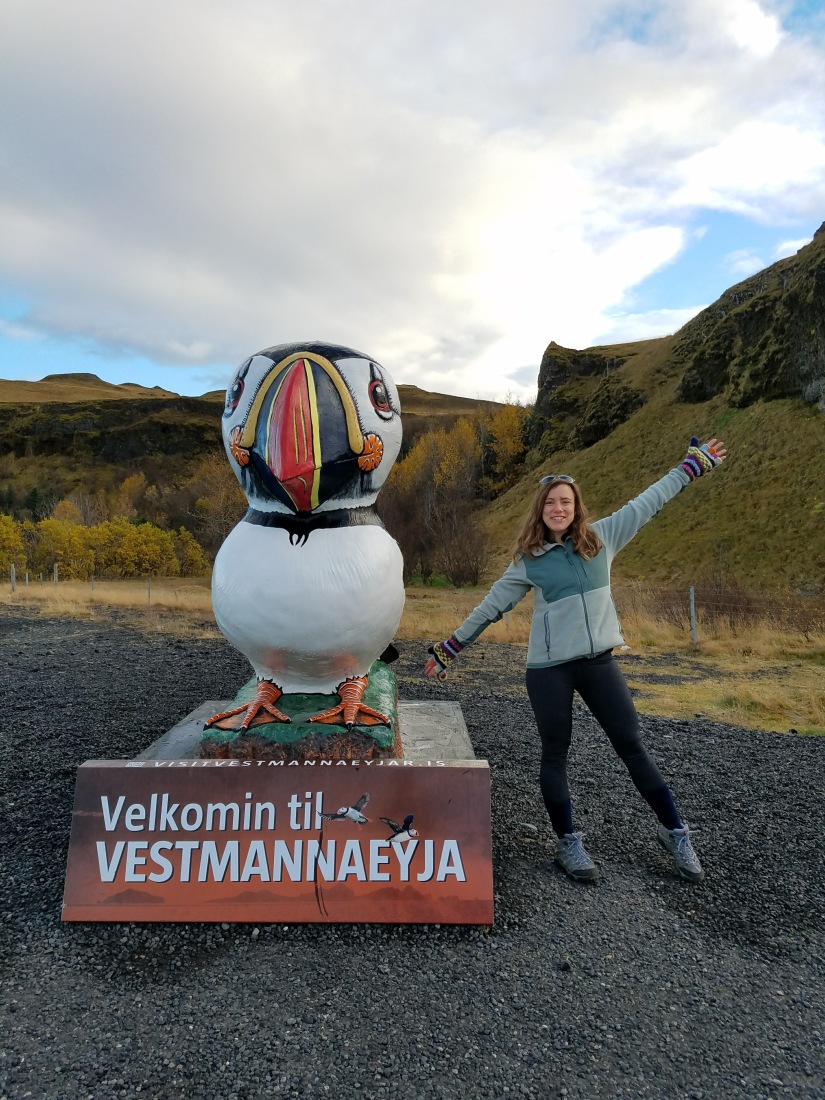 Before we drove to Glugafoss though, we saw a trail of people walking straight up this hill. Being the adventurers that we are, we just had to stop and do the hike ourselves. You’d have to experience this walk uphill for yourself to understand how challenging this was…it was so steep we had to crawl on all fours to reach the top and then slide down on our butts to get back down.

But alas, the view, as always, was worth the trek :)

Glugfoss: Megan and Becca’s favorite waterfall in Iceland (that we know of) 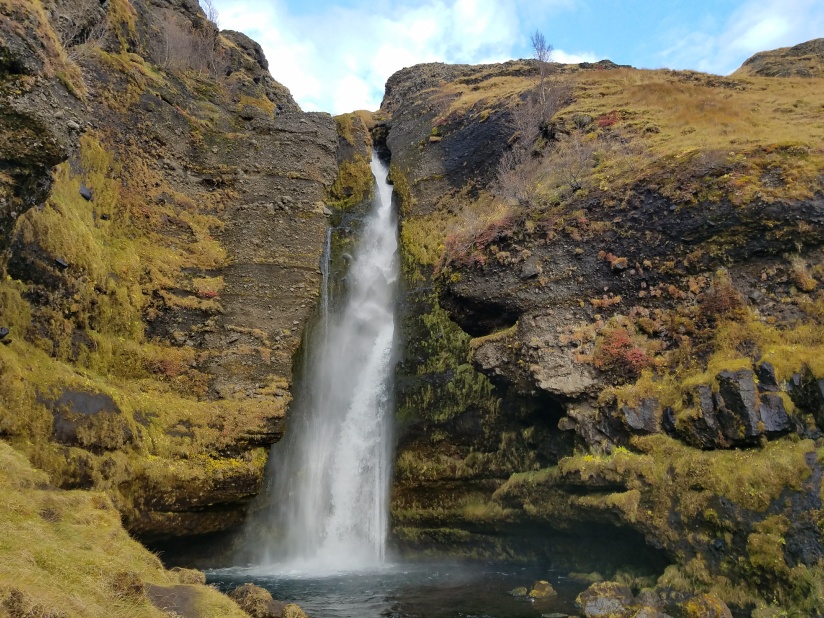 Chilling behind a waterfall feels a bit like being a car wash. 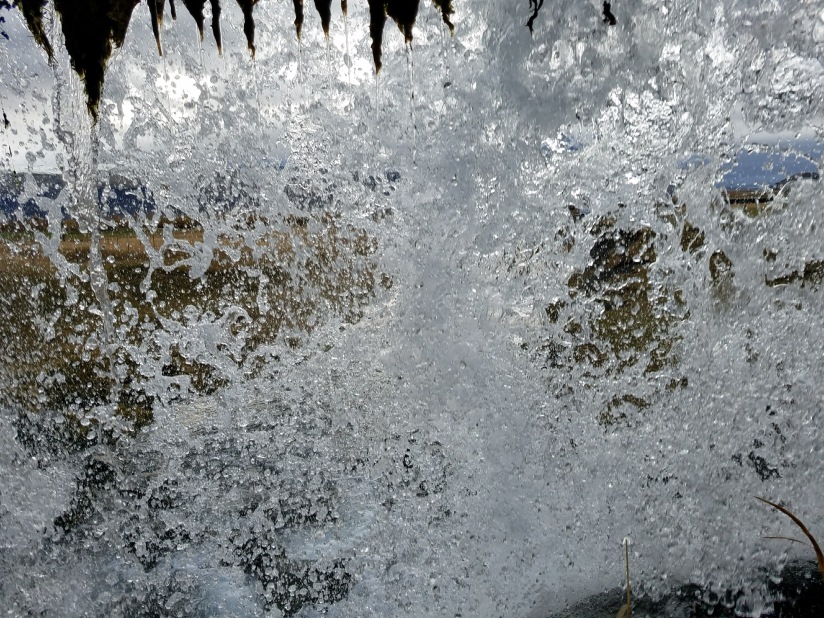 Don’t be fooled, I heavily advanced the colors in this picture. 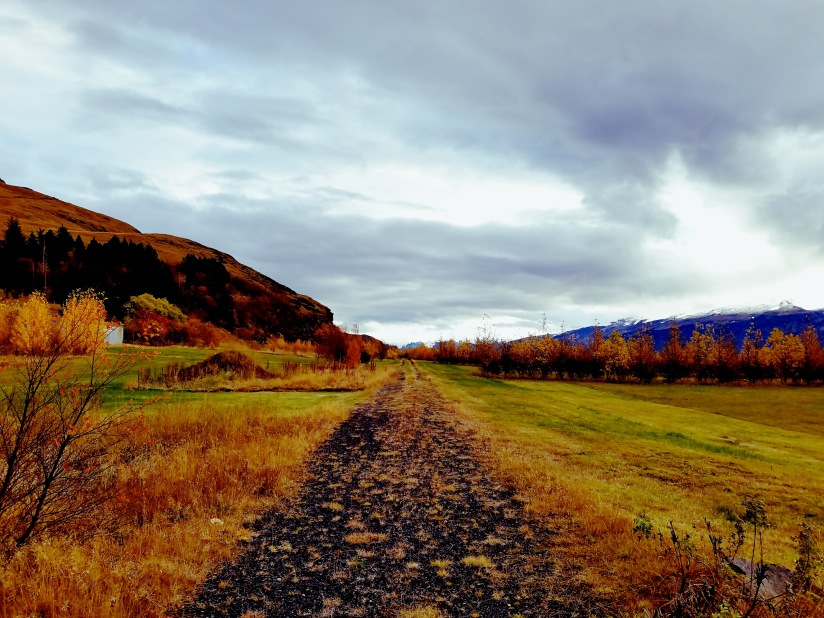 Full disclosure, we hadn’t showered in 5 days when we took this picture. We still look good though, don’t we?! 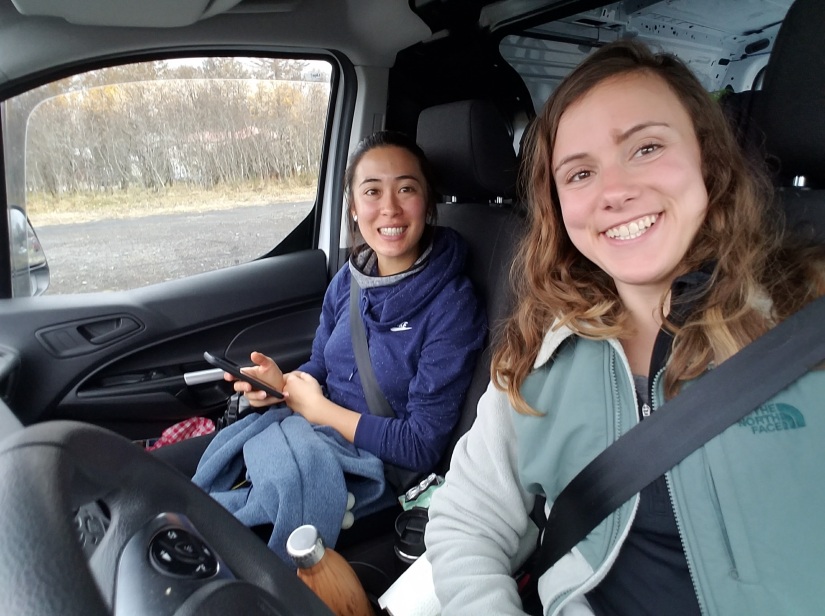 On our last full day, we went to Þingvellir (Thingvellir) national park. They’ve shot scenes from Game of Thrones here!

Standing in the rift between 2 tectonic plates. We felt like Mandy Moore in a Walk to Remember being in two places at once.

When it’s time to bring the wild sheep in for the winter, they are all herded into this pen–they are divided up depending on who their owner is. I forget how they can tell the difference among all the sheep, but there is a way.

The only time I bought food that wasn’t from the grocery store was this hot dog from a gas station. Because if we were going to purposely boycott Blue Lagoon, I at least had to try one of their hot dogs! Spoiler alert: It tasted like a normal hot dog.

Pretending like we were unimpressed by this waterfall. Although now that I think about it, I am pretty sure we were actually underwhelmed by its size…

Our last sunset in Iceland 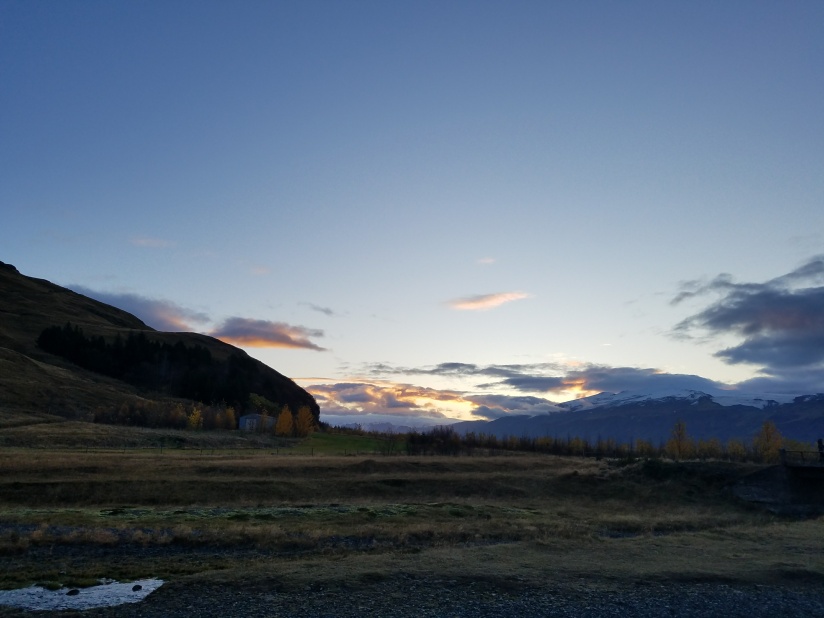 We waited until the last day of our trip to take a picture of our home for the past week, so excuse the mess! 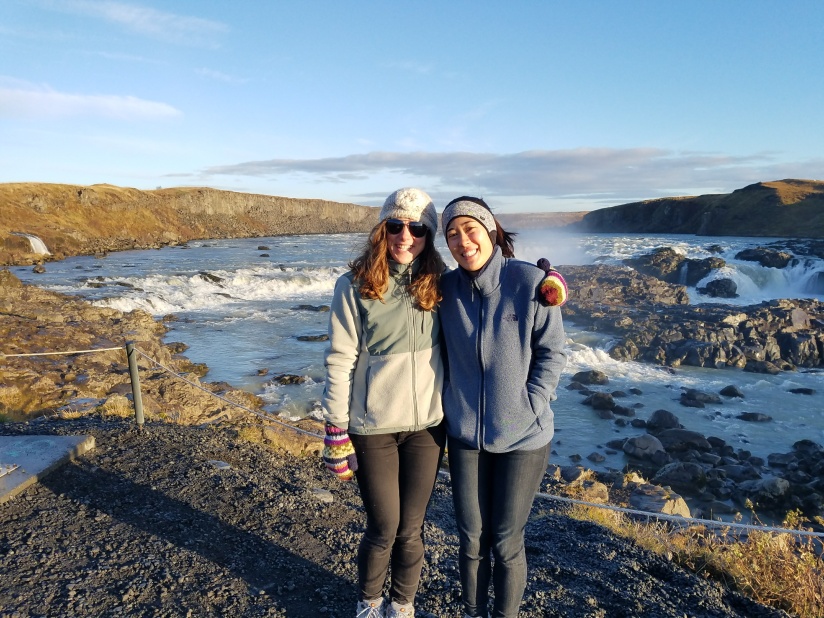 So there you have it! I definitely recommend braving the cold and visiting Iceland in the fall. Because the chance to see the Northern Lights is way better than sunlight until midnight!

If you have any questions about camping in Iceland after the main tourist season is over, feel free to ask in a comment!