I can’t believe it’s been five years since I did my first (and only) three-day juice cleanse to jump start what I affectionately named my “Lifestyle Change.” For me, getting healthy was never about dieting–because all diets end. And my decision to start eating healthy and exercising wasn’t a new years resolution–because I never actually keep those. That’s why I started my juice cleanse on December 31st instead of January 1st.

Five years ago, I was beyond ready to make a permanent change within myself. Not just with my outward appearance, but also change the way I viewed myself.

If you want to read about my juice cleanse experience, here is my post titled “Nothin’ But Juice” from 2014.

As I look forward to 2019 and reflect back on the past five years, I realize that I’ve learned how to say “I love myself” out loud, and finally mean it.

Over the past five years, I’ve been through two big breakups, five different moves (including one move overseas to Japan, and most recently, my move from Boston to Southern California), and four new jobs. Even writing that sentence was exhausting! Despite all the constant uprooting my heart and body experienced, one part of me hasn’t wavered: my promise to myself to stay on track and keep a healthy lifestyle.

Back in February 2014, what helped me to shed 50 pounds was running, along with changing my eating habits entirely. You can read about exactly how I shed the weight in my post from 2015.  Running became my first sanctuary–I still haven’t found anything that comes close to a runner’s high for me. I can escape to a place where no bad thought can touch me, and I could just keep running on and on forever.

But today, I’m so out of running shape it’s not even funny. The last race I completed was in June of last year, and I can probably count on less than ten fingers how many times I’ve gone out for a run in the last calendar year.

I beat myself up for falling out of running shape for a while because I worked so hard to get in it in the first place. I could stay angry at myself for this, but instead, I’m focusing on being grateful. Running will always hold a special place in my heart for all that it’s given me.

Just like I replaced chicken fingers with sushi five years ago, I’ve found another activity to focus my energy on and keep me active. (I know that was a terrible analogy but I’m just gonna go with it.)

And that activity is…

Photo by Prasanth Inturi on Pexels.com

Photo by rawpixel.com on Pexels.com

The first time I ever took a yoga class was when I was a junior in college–which was 10 years ago. (Yikes.) I have this clear memory of me trying to do the crow pose and falling flat on my face in the middle of class.

A decade later…I still haven’t mastered the crow pose. And you know what? I’m okay with that. I’ve learned that with yoga, I don’t have to be perfect with every pose. Just because someone decides to do a handstand instead of Downward-Facing Dog like the rest of us doesn’t mean I’m not good at what I do.

Trust me, it’s taken me a long time to feel that way in a yoga class. I’ve been practicing yoga on and off for ten years. I’ve been that girl in the last row who the instructor needs to reposition several times during class. I’ve run out of the room during hot yoga because I thought I was going to pass out. I’ve felt fat and not flexible and overall hopeless and out of place on my mat before. I thought yoga was supposed to be relaxing, amirite?

As I’ve learned to accept myself for who I am, I’ve in turn learned to let go of my fears within my yoga practice. Since moving to California six months ago, it’s been way too easy for me to make it to class after work because there’s a yoga studio literally half a mile down the road from my office. I’d actually have to go out of my way to not stop for class. 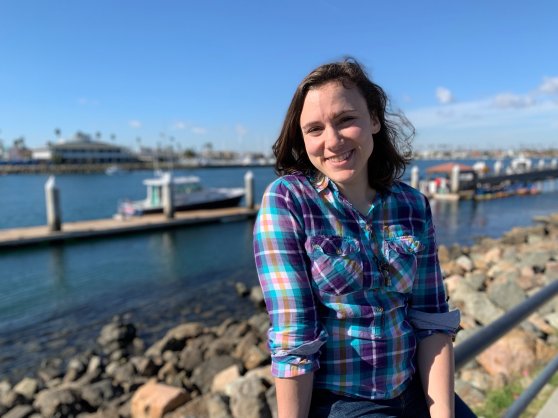 Cheesin’ in the sun by Ballast Point in Long Beach

Now I’m that girl on her mat who has finally gotten the courage (and coughed up the money) to put a deposit down for yoga teacher training. It’s taken me many years to find a studio that works for me, and I’ve finally found it within the CorePower community here in Southern California.

This cat is ready to become a certified yoga teacher!

My teacher training starts on February 20th, and I can’t wait! Deepening my yoga practice and getting certified to teach has been in the back of my mind for many years now, but I was always too self-conscious to really take the plunge. I guess now that I’ve found myself off of my mat, I’m ready to find my flow on my mat.

2 thoughts on “5th Anniversary of My Lifestyle Change”