Last week, I traveled to Nagasaki for the Chinese Lantern Festival. This was my first trip to a part of Japan that was not a part of Kagoshima or Tokyo, so I was really excited to go. I took the overnight ferry from Amami to Kagoshima Wednesday night, and then my friend and I traveled by Shinkansen to Nagasaki. It was also my first time taking the Shinkansen and I couldn’t believe how fast it went! I felt like I was on the Hogwarts Express when a woman strolled by with a trolley full of drinks and sweets. One of my favorite parts about being on an island is that I am utterly fascinated by anything and everything on the mainland…like train stations!

The Lantern Festival was absolutely spectacular. The entire city was decorated with red, pink, and orange glowing lanterns. At night, the lantern lights reflected off the water like little orbs of fire. Since this was a festival for the Chinese New Year, there were giant, glowing displays for each of the Zodiac animals. I was born in 1988 so I was very excited to take pictures with the dragon! 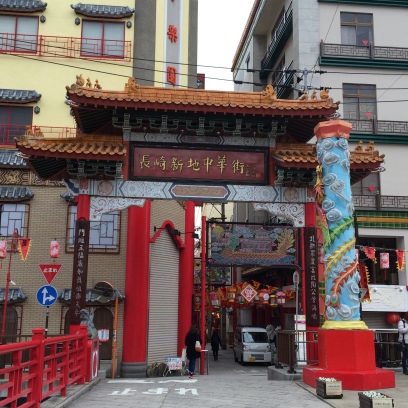 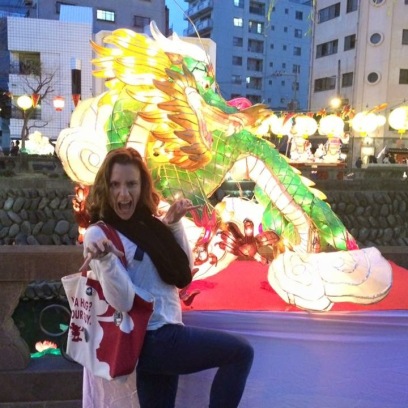 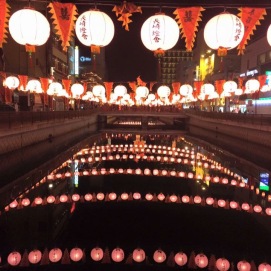 I loved exploring a new city, especially one as diverse as Nagasaki. I didn`t realize how cultured Nagasaki was until I went there. Because of trade with the Portuguese, Christianity was first introduced to Japan in Nagasaki. The Dutch brought many western influences to Nagasaki as well. During the Edo period, when the rest of Japan was closed to the world, Nagasaki was open. The aesthetic of Nagasaki is really interesting too. All the houses are crowded together and extend far into the summit of the mountains, creating a panoramic night views that lights up the whole city.

Other than accommodation, we didn`t plan anything to do in Nagasaki until the day we arrived. We came for the lantern festival but didn`t do very many festival things. And I wouldn`t have had it any other way. (Lots of events were canceled because of the rain on Saturday, anyway.) The festival things we did were EAT, witness a Chinese dragon dance, and marvel at the beautiful lanterns hanging everywhere whilst belting “I See the Light” from Tangled.

Here`s a little glimpse into my trip:

This is what we ate: 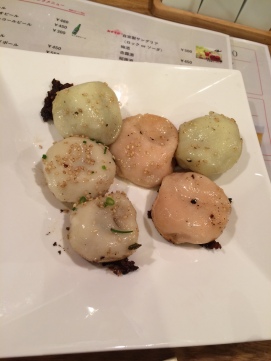 From left to right: Champon (A Nagasaki staple), Taiyaki (filled with anko), and mini steamed buns (I ate the pinks ones–they were filled with shrimp!)

There were so many steamed buns for sale at the festival. And some of the food stalls sold steamed bun stuffed animals, and I honestly started to think that the Nagasaki mascot was just a steamed bun. I should have taken a picture of the stuffed animals. They were so cute.

This is what we explored intentionally:

–Sakamoto International Cemetery. It was atop a hill, so we got in a nice little hike while exploring. We also discovered a shrine at the top too. 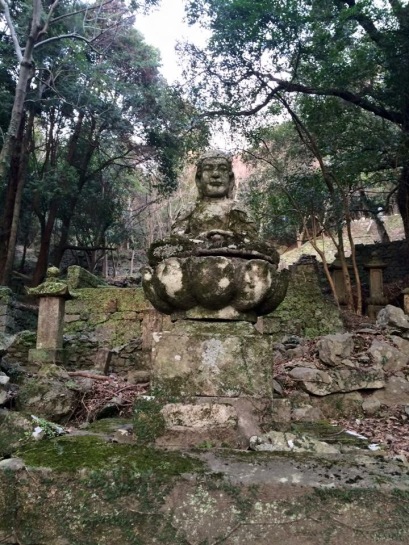 –Nagasaki Peace Park and the Atomic Bomb Museum.  The park is quietly beautiful and serene, but it was incredibly overwhelming to stroll through it, and then to learn more about the atomic bombing and it’s obliteration at the museum, especially as an American. 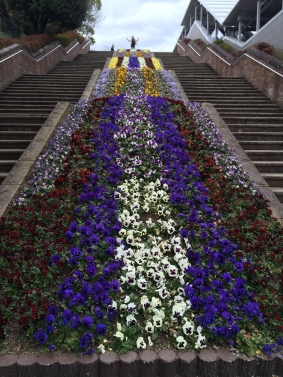 Steps leading up to the peace park 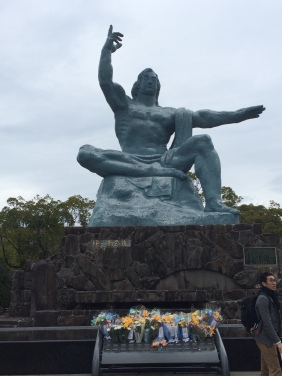 –Atomic Bomb Epicenter. Again, it was overwhelming to be here, but right next to epicenter are hanging displays of one thousand paper cranes, each representing one wish for peace. 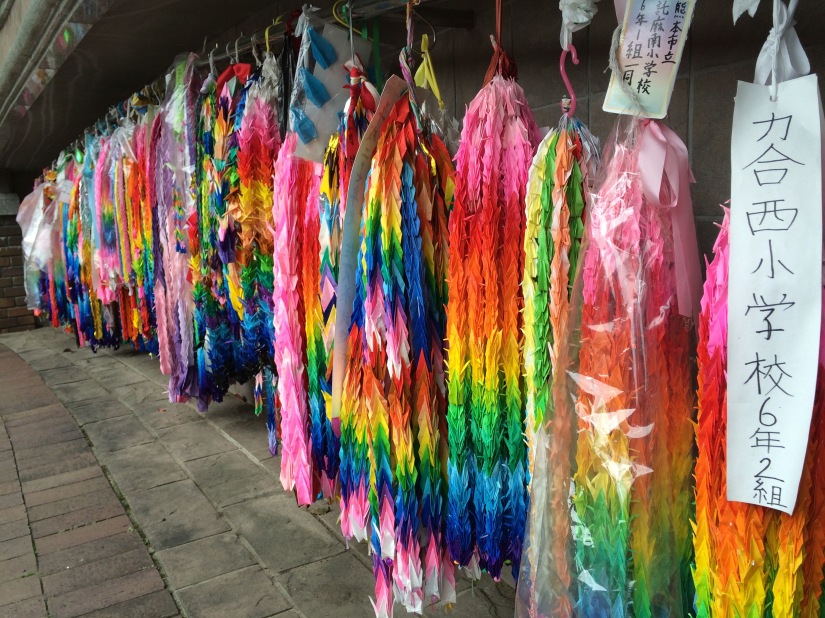 –Glover Gardens. Walking through the Glover gardens is one of the top things to do in Nagasaki city. The gardens are deceptively big, and being here made it seem like we were transported to Europe. Thomas B. Glover`s house resides in the gardens. Glover, originally from Scotland, introduced a lot modernization to Japan through trade. The Glover residence is western-style, but with a traditional Japanese roof. What a crazy contradiction. It was nice walking through the gardens and seeing all the small children excited to feed the koi fish in the ponds. 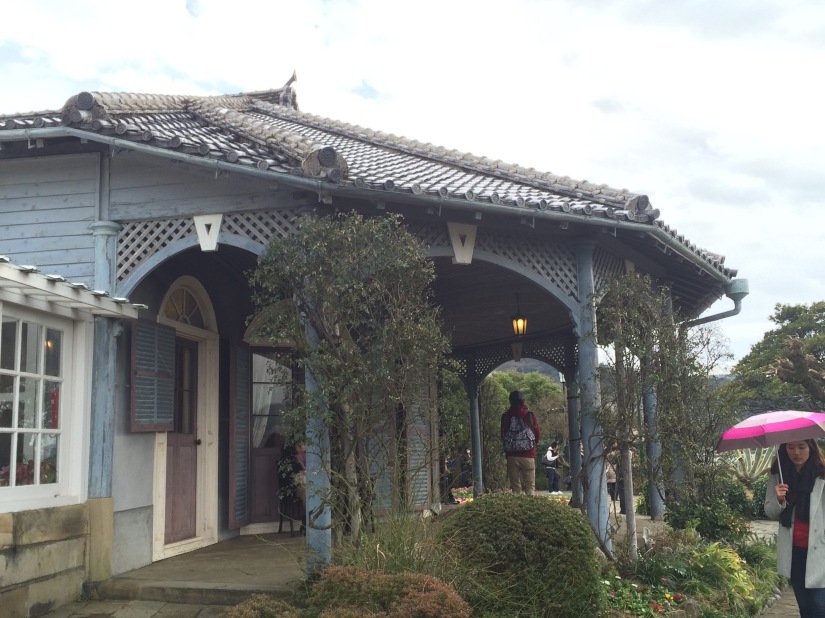 –Dejima. This place was originally a man made island  in the 1600`s that segregated the Portuguese people and kept them from spreading the influence of Christianity. After they were expelled from Japan, Dutch settlers arrived and Dejima became the only link with Europe and Western technology for Japan at that point in time.

–Kiyomizu Temple. It’s more famous namesake is in Kyoto, but I  just want to note that I always love stopping by temples and shrines in the middle of a city—like the Meiji shrine in Shibuya. Being surrounded by the hustle and bustle of city life and then suddenly being in the peace and serenity of nature and an ancient temple is one of my favorite things about Japan.

–Shofuji Temple— We didn’t actually go inside this one, but it’s cool because this temple is actually Chinese, not Japanese. Props to the monk who walked up the steps at the right time for my picture too.

And this is what we explored unintentionally:

–Picture book museum. I was in literary heaven. I saw so many of my favorite childhood books in Japanese, like The Velveteen Rabbit! It took every fiber of my being not to spend all of my money on books. 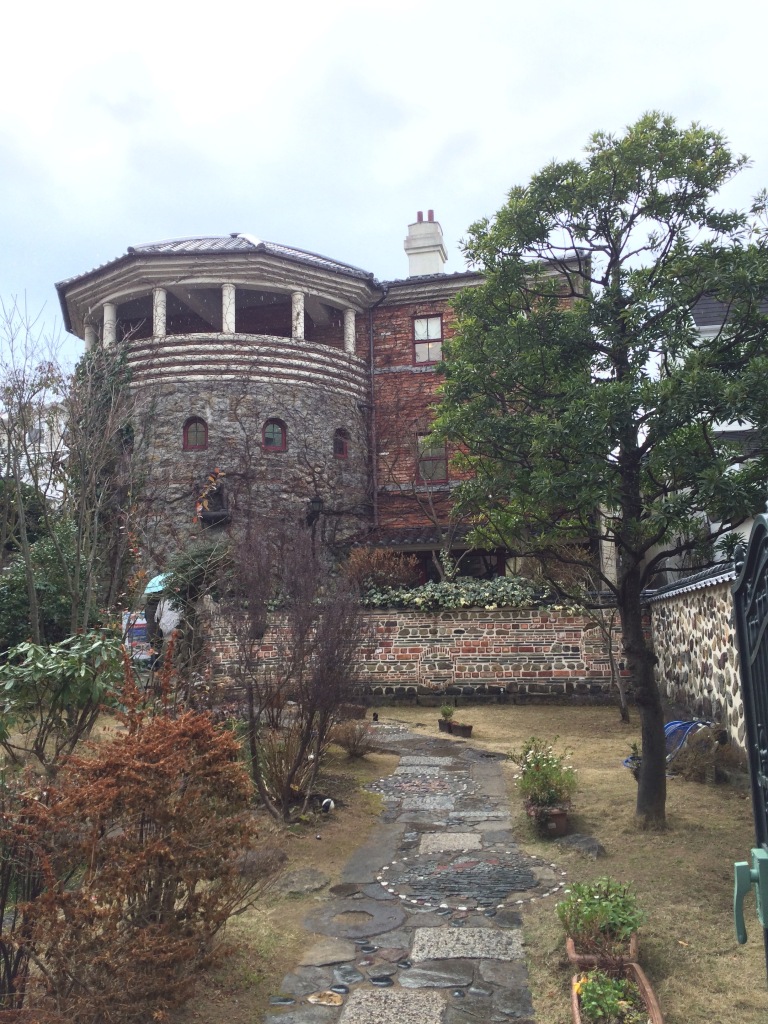 –A Random, Cute Café  that I don`t know the name of. The woman working there was an English speaker, and I had the best salmon and veggie sandwich with mayo. I don’t know what it is about Japanese mayo, but I love it. I don`t like American mayo. I also devoured an earl grey pastry. It tasted delicious, but I refused to take a picture because the tea leaves inside looked like little black bugs…ew.

–Nagasaki Dejima Wharf Restaraunt. After an embarrassing situation at an onsen (more on that later…maybe), we went to a waterfront restaurant that overlooked the Nagasaki harbor for wine, and to our great surprise, there was CHEESE FONDUE on the menu! I haven’t had my beloved cheese in melted, liquid goodness in so many moons.

And here are a bunch of random things from our trip:

Location, location, location. In part, what made the trip so fantastic was the prime location of our hostel. I secured us accommodation mere steps away from the entrance of Chinatown, right in the glowing heart of the lantern festival. Our hostel location also granted us easy access to the rest of Nagasaki. The hostel employees were generous, friendly, and provided us with English maps for the festival and Nagasaki sightseeing. And one of the guys who worked there happened to be an incredible artist. He likes to sketch portraits on paper bags of people who stay in the hostel, and he kindly offered to draw one of Lesley and me!

I was in Nagasaki from Thursday afternoon to Sunday afternoon, and that was the perfect amount of time for me to be away, I think. I returned to Amami by ferry at 5 am on Monday morning  completely exhausted. I only slept two hours on the ferry because the waves were insane that night. On top of that, I stayed out until the wee hours of the morning either dancing or singing karaoke while I was in Nagasaki. When I know I will likely never return to a place, I`m going to squeeze all of the fun out while I can.

Nagasaki, you are great fun. Please remember me by my warm and fuzzy navy blue Uniqlo hoodie that I lost somewhere.