On Thursday, June 7th, two days before my thirty-first birthday, I conquered Half Dome in Yosemite with three friends. It was a grueling, fifteen-hour hike that I thought would never end, but looking back on it two weeks later, it was worth all that hard work.

I had been planning to visit Yosemite since first moving to California last summer, but I didn’t think I’d end up hiking Half Dome due to needing a permit, which can be pretty difficult to score. According to the National Park Service website, there was only a 19% success rate of getting a permit from the pre-season lottery in 2017! I increased my odds by selecting the maximum number of date ranges allowed–so six. I avoided holiday weekends like Fourth of July and included Fridays and Mondays in my ranges as well. I lucked out and got four permits to hike on Friday, June 7th! There are 225 permits available for each day during the pre-season lottery, and only 50 permits available for the daily lottery. They implemented permits for hiking Half Dome back in 2010 because overcrowding on the cables became too problematic.

The morning of our hike, we woke up at three am to get dressed and out the door. We weren’t able to book a campsite in Half Dome Village or Little Yosemite Valley, so we stayed at an Airbnb in the town of Mariposa, just on the outskirts of Yosemite National Park. From our place, the drive was about an hour and fifteen minutes to the trailhead, so after peeling 6 hard-boiled eggs for our breakfast, I went back to sleep.

Despite getting into the park by five am, we didn’t start hiking until about 6:15 am. We had trouble finding parking that wouldn’t get us a ticket or towed and needed one last bathroom break with real toilets. At least it was already light out by the time we started our hike. We walked on an increasingly steep paved path for the first two miles of our hike that ran along the Merced River. I could feel my thighs already burning with each step at this point, and I knew I was in for my most challenging hike so far.

After crossing a footbridge over the roaring waters of Merced river, we approached Vernal Falls. To get past it, we had to climb up extremely slippery stone steps. I was foolish and didn’t stop to put on my rain jacket; I just started up the steps so I could get to the top as fast as possible. The “mist” from the waterfall got us soaking wet! The water was freezing and I had to find creative ways not to get my shoes completely soaked…but I failed at that. I pulled up the hood of my thin Uniqlo jacket and did the best I could to block water from getting into my eyes. Funny they call this the “Mist Trail.” I think “Cold Shower Trail” would be more fitting.

I didn’t take any pictures of Vernal Falls because like I said, all I wanted to do was get out of the “mist” as fast as I could. (Aditya somehow managed to eat a sandwich while walking up the steps.) I did take this picture while I was waiting for the rest of my crew to make their way up the steps though. That mist was not to be messed with.

Here’s a clearer shot of one of Yosemite’s iconic waterfalls: Nevada Falls

After our waterfall adventures and a few stops to rest and refuel, we followed the sign that told us Half Dome was only 4.5 miles away! The next leg of the hike took us away from the majestic valley views and into the woods. Hiking through the wooded area was not as fun as seeing the towering granite landscapes, but at least there was more privacy for pee breaks!

After what felt like forever, we finally made it out of the woods. (And I think I had Taylor Swift’s song “Out of the Woods” in my head for about half the time.)  We were at the base of the subdome, a large, granite dome we had to conquer before reaching Half Dome.

The first part of the subdome was all steep stone steps. I took a lot of breaks, in part because I was tired, but also because I was mentally preparing myself for the biggest challenge of the day. 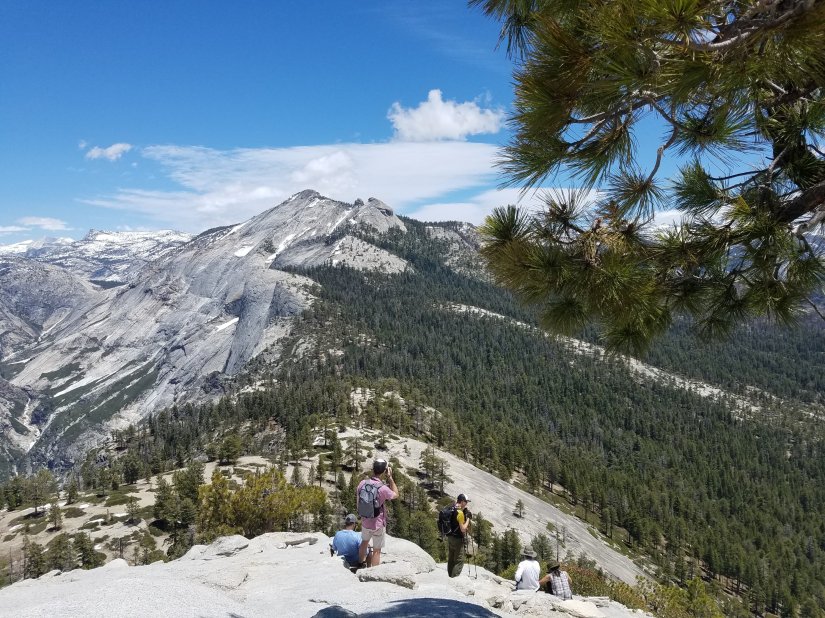 See that line in the middle of the big rock behind me? Yep, those are people going straight to the top! 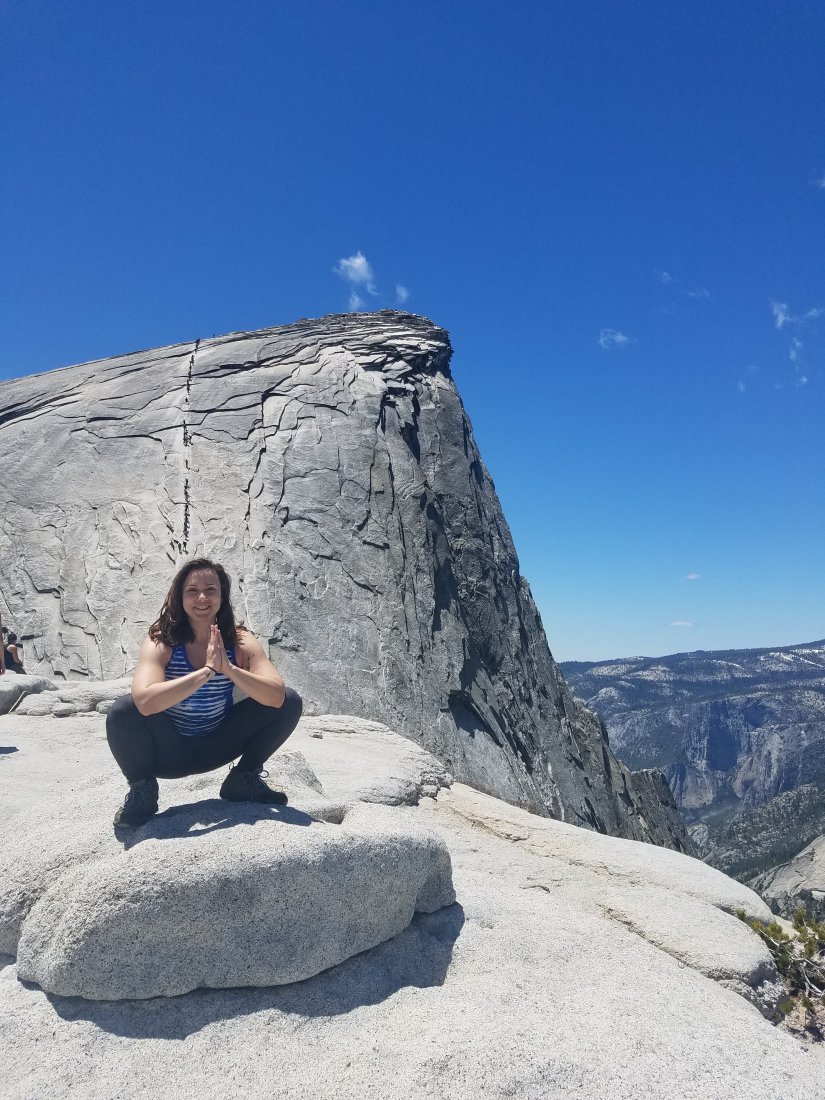 All the pictures in the rest of this post are from after we went up the cables. For obvious reasons, I didn’t take any pictures as we climbed up the cables so I could hold on for dear life.

Here is a picture of us coming down the cables though so you can see what they look like, and get an idea of just how steep the walk is to the summit of Half Dome. We all wore gloves so it didn’t hurt to grasp the cables tightly.

The cables were more challenging than I anticipated–it required a lot of upper arm strength and I got winded easily. Fortunately, every 12 feet there was a piece of wood we could rest our feet on to catch our breath. About halfway up the cables, I almost turned back around because I was so tired (and scared), but everyone who was coming down (yep, you have to come down the same way you went up) encouraged me and told me it was worth it. Everyone we met on our hike was so kind and encouraging–I think we all should just live our lives walking up and down cables because then I think people would start being much nicer to each other.

When we finally made it to the top, we were surprised to see some snow up there! It was really warm and sunny though and I couldn’t wait to rest for a little before we started on our long descent.

If you look closely, you can see me on the rocks to the left. My rain jacket kinda blends in with the background. Right before this photo was taken, I actually had just woken up from a nap! That’s right–I took a nap on the summit of Half Dome! It was glorious and I’m actually pretty proud of myself for being able to sleep up there. I think I can fall asleep anywhere. 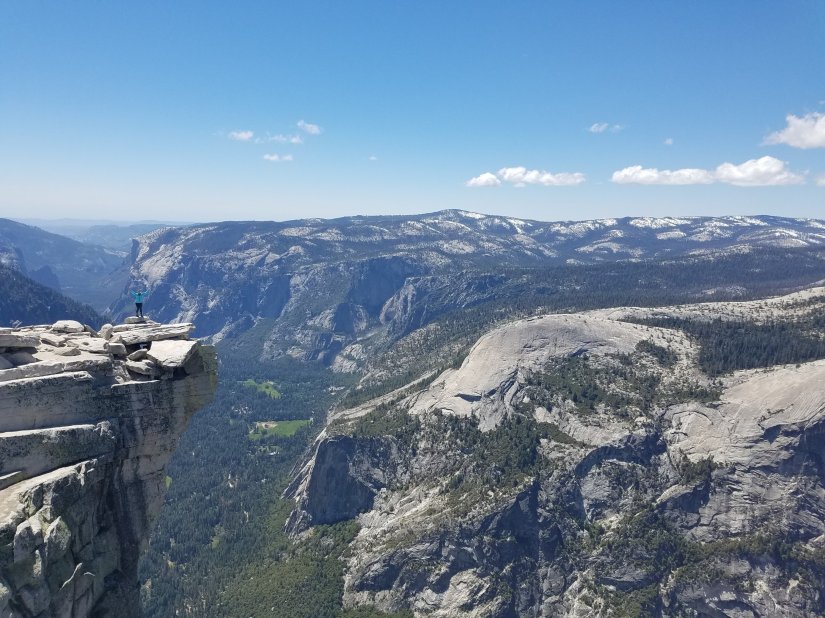 It was between 2:30 and 3:00 in the afternoon when we started climbing back down. I was really glad I caved and bought hiking poles*, and I think my knees were too. We chose to take the John Muir Trail back down even though it added an extra mile, but we really didn’t want to pass Vernal Falls again.

*I ordered a pair of  Trail Buddy Trekking Poles  from Amazon. They were only $36 and I got them in my favorite color–aqua blue! I’ve never been one to use hiking poles, but they honestly were a huge help when hiking Half Dome, especially when descending because leaning on the poles will alleviate a lot of the impact on your knees.

Yosemite wasn’t done surprising us though…we were faced with more water after all. The best way to avoid having to wade through ankle deep water was to walk along the edge of the stone wall, and then climb behind the waterfall because it was too slippery to walk along the wall at this point. (You can see the people in yellow and blue are just coming out from behind the waterfall in this picture.) 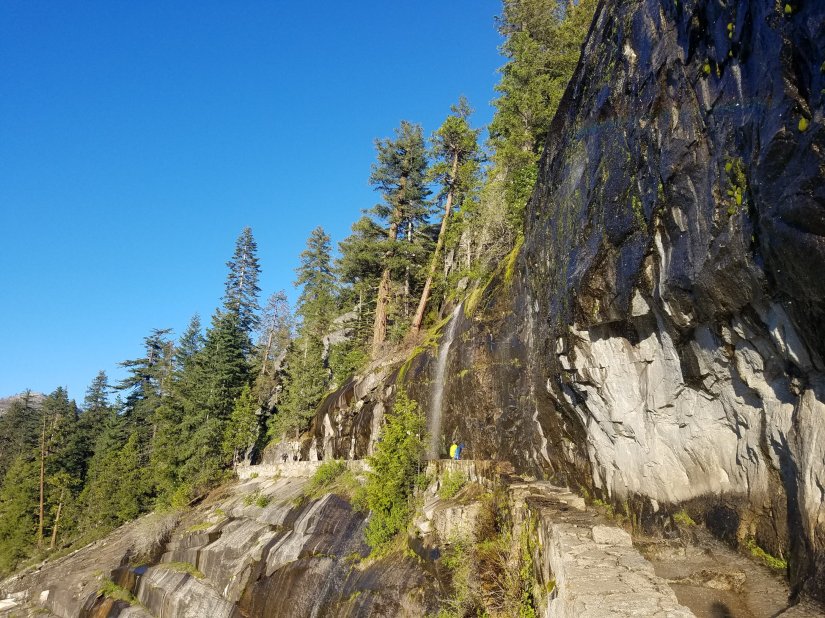 I was pretty proud of myself for figuring out how to get across without getting my feet wet, but now I know I’d rather take my chances with falling off a stone wall in order to keep my socks dry… 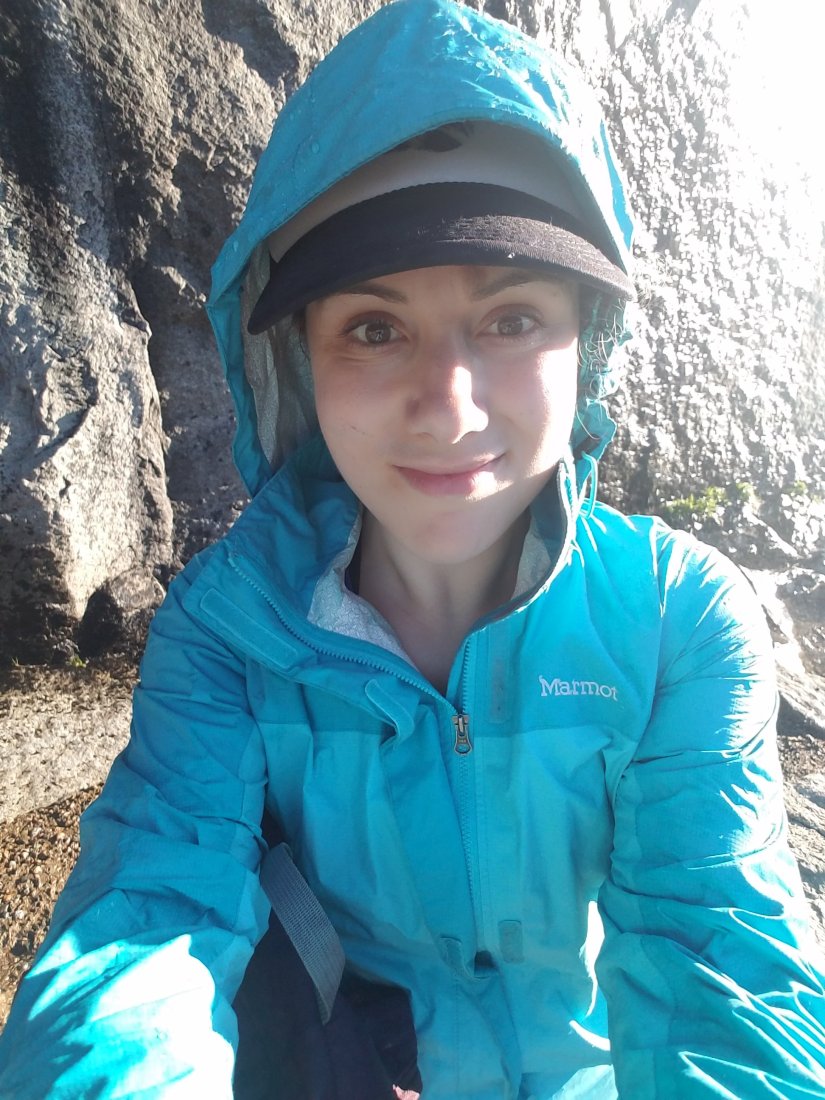 The sun crept below the valley at this point, and the shadows loomed larger…we knew we had less than an hour of daylight left. And then we picked up the pace!

By the time we got back to our car, it was 9:30 pm. So our overall hiking time was about fifteen hours, including our lunch and dinner breaks, bathroom breaks, two stops to filter water, and the time we spent at the summit. We took longer than we wanted to (We were aiming for a twelve hour day), but at least we all came back in one piece.

All smiles after we’d just conquered climbing up and down Half Dome! 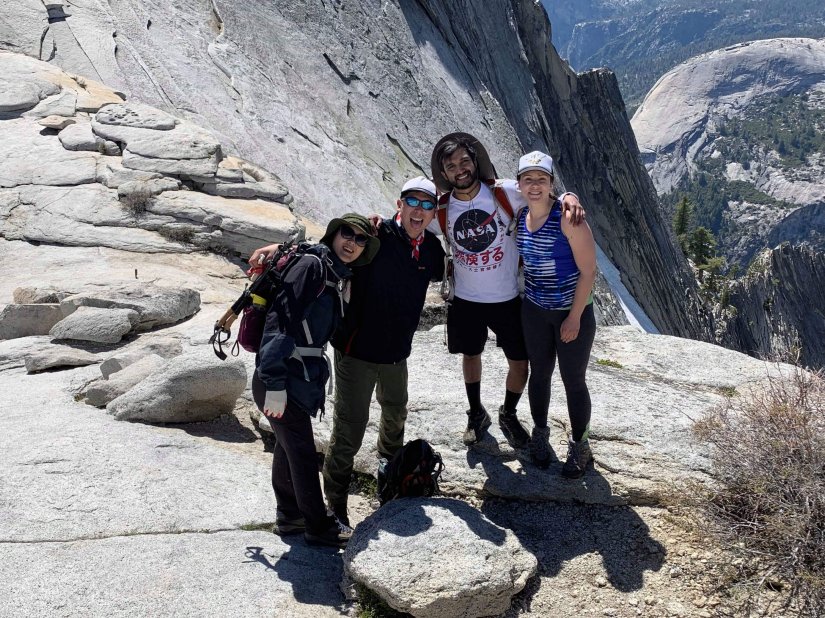 So what am I going to do for my birthday next year?

2 thoughts on “Conquering Half Dome”