After reading about bunkasais from other ALT blogs, I am getting the sense that events in the Japanese school system (culture day, sports day, graduation, class matches, and so on) are very similar in production all across Japan. But what makes each of them stand out to all of us working at our schools is the individual experience we have with our students.

Sannensei Role
As for my school, bunkasai was a day for sannensei to showcase their artistic talents, and a chance for the hardworking sannensei teachers to take a break and have some fun too. Every sannensei class dressed in costumes, put on a hilarious skit, and then did a choreographed dance to a popular song to close out the performance. Most of the songs were J Pop, but one of the classes danced to Summer Nights from Grease! The homeroom teachers took part in the performances too and it was so much fun to see everyone letting lose and having some silly fun for a change. In between some of the performances, some of the funniest sannensei boys got up and did some stand-up style comedy. They had the whole audience laughing, even me who couldn’t understand a word.

Aside from the skits, there were many performances from my school`s art clubs. The day started with a beautiful and awesome performance from the calligraphy club (it blew my mind that calligraphy could actually be performed), and then the jazz club danced. The girls also blew my mind because they were so incredible and talented. 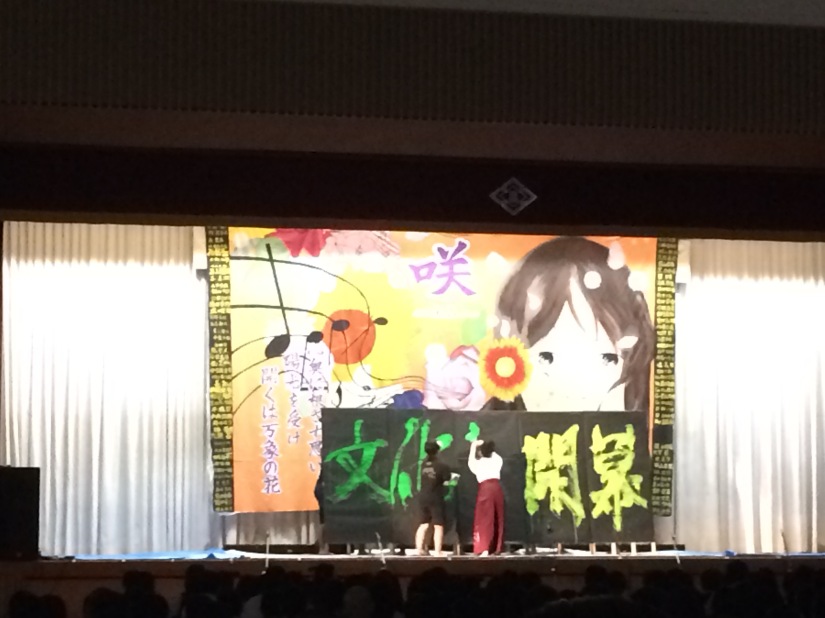 My school’s rock band (that’s right–my school has a rock band!) played for a bit during the lunch break. The lead singer of the band is famous on the island. She is an amazingly talented singer! Her songs are often played at different places around the island.

Ichinensei and Ninensei Roles
All the first and second year students decorated their classrooms with different themes. Some of the highlights were “Amami in the Future,” “Amami Nature,” seashell polishing, and fundraising for the Kumamoto earthquake, just to name a few! It was so special to see all my students work together as a team and be creative together. They all worked so hard on their classroom displays. 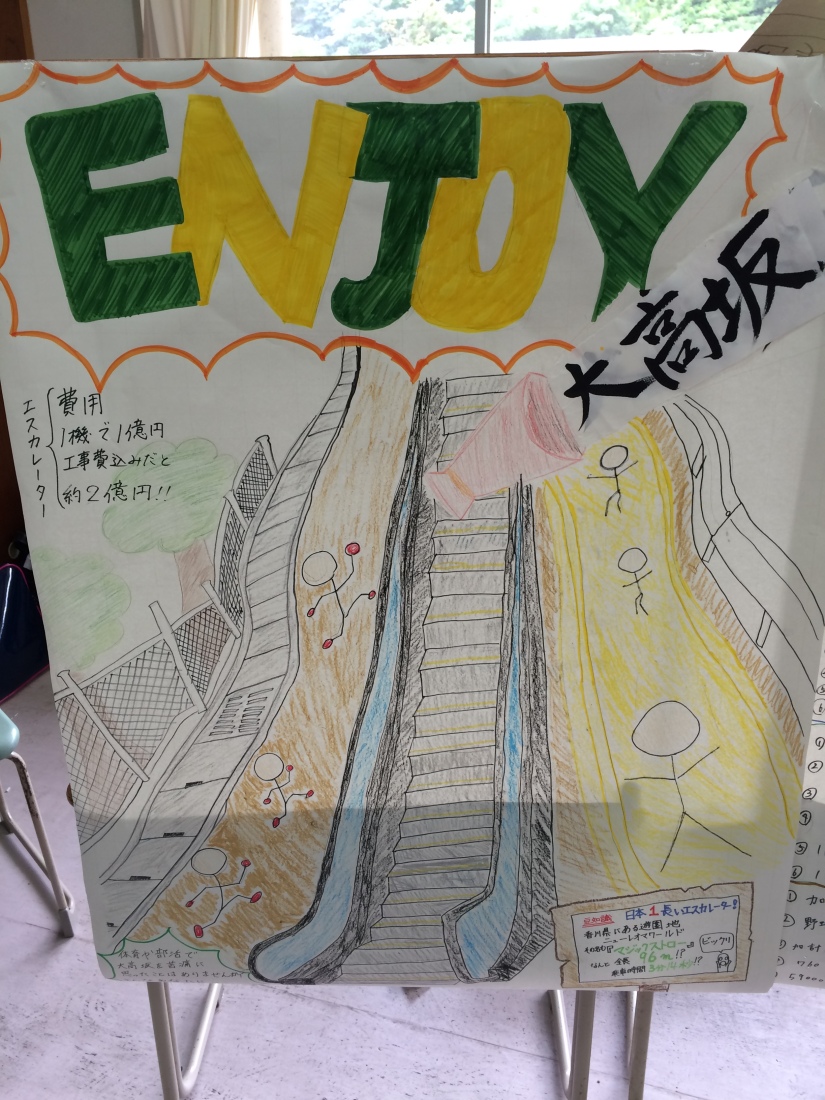 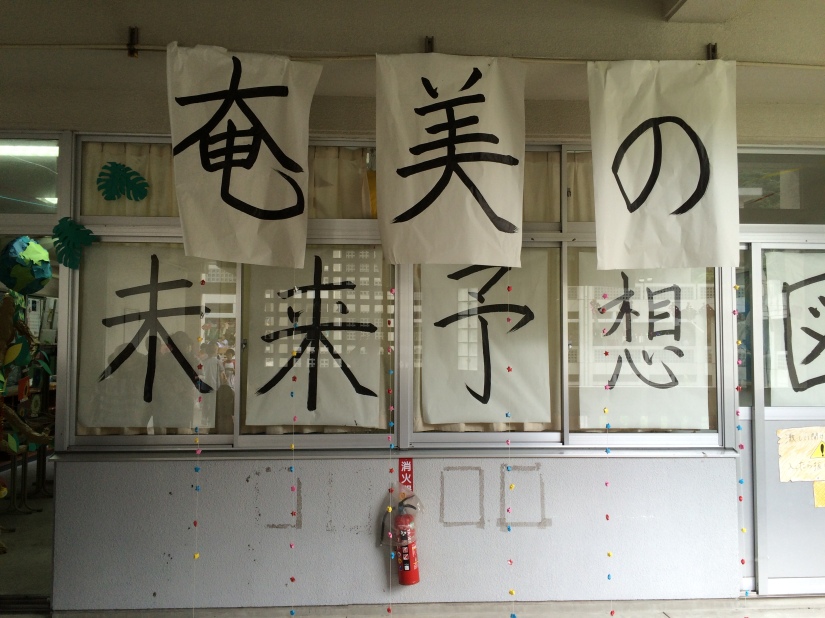 Lunch was prepared, cooked, and served by a small group of first and second years, led by my school’s awesome home economics teacher. They made beef curry for hundreds of people! It was delicious.

Becca’s Role
Like all the other teachers, I got to choose a kanji and then write it in calligraphy and have it laminated and judged by my school’s calligraphy teacher. I decided to write 花 (ka,) which means “flower.”  I chose it because it’s a part of the kanji name a JTE gave to me.

I also brought some of the Amami ALTs with me so they could enjoy my school’s culture with me too! Having them there made the island feel even smaller. Students from all over the island also came and see my school`s culture day and it was fun to see my friends interact with their students or run into their former students who are now my students.  I really appreciated them coming to support me too because…

I got to perform hula dancing with my students for the first time! I have been taking local hula classes since February, and a few months ago, two of the students I dance with came to the teacher’s room and asked me if I wanted to perform hula with them for bunkasai. They were so excited when I said yes. I had to practice really hard to learn the dance (they already knew it because I think they did the same dance last year) and I was freaking out because they put me front and center. But I was so relieved to have my friends in the audience supporting me and I had a lot of fun dancing! My students are all beautiful hula dancers too! I cannot believe how graceful they are…I am just a goofy dancer.

The day ended with the entire student body crowding around the school band as they sang our school’s traditional bunkasai song in the middle of the gym. I think they played the song about 4 or 5 times in a row. It was really fun to watch all the students coming together and enjoying each other’s company. The teachers wanted all of the students to learn the words so our cleaning time music had been replaced with the song for a whole month!

And then at night, I went to an enkai with my teachers and I got to witness the school’s principal rapping in Japanese. Because Japan. 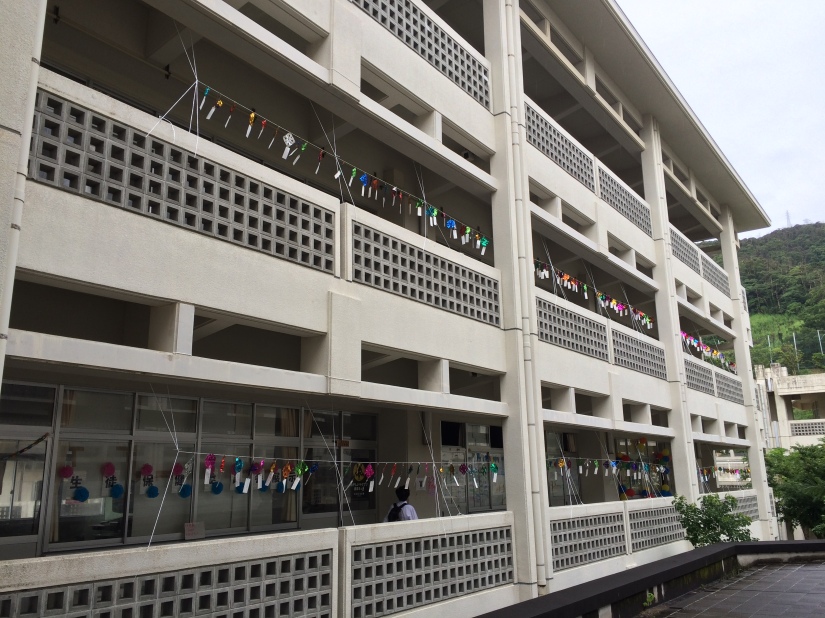